We have all done it. Bought an overpriced cup of coffee from a local coffee shop. You know the kind, the one that’s seemingly perched on every street corner with people sitting around on their laptops. Do these people have no where else to be? Its also where you can’t get a simple cup of coffee. No, it’s where overly pretentious consumers demand a triple latte, no foam, low fat soy milk on the side with a shot of expresso, fat free whipped cream. And you can’t simply order a small or large. No it’s a jumbo-bulker or a skinny-skimpier or a teeny-tipper.

Give me a break.

I stopped going to those shops the day I stopped in for a small, black coffee and they didn’t understand what I wanted. Worse, the moron in front of me spent ten minutes berating the barista (who could not possibly just be some teenage kid slinging cups of Joe) because she didn’t stir her coffee with a blue stirry stick three times precisely. This was my reaction:

“Are you kidding me? Stir your own freaking coffee!”

Moron in a huff: “I order this every single day and she is supposed to stir it three times just like I ordered.”

This was followed by thunderous applause from everyone else in line but the fact remains, that person was a moron for more than just expecting some acne-ravaged kid to stir her coffee, the idiot was also dishing out $8 for a cup of coffee and by her own admission that was every single day.

So, assuming she really did buy this overpriced cup of coffee every day, that would amount to a whopping $2,920 a year.

This particular form of insanity is made all the worse by the slightly stale baked goods that are pure suggestion marketing on this coffee chain’s behalf. The bottom line is that by the time moron leaves, she is likely to have spent $12 for that coffee and scone (or what the chain thinks passes for a scone. Assuming she succumbs to the lure of baked goods 50 percent of the time, that puts her more than $3600 in the hole every year.

With absolutely nothing to show for it.

Contrast that with the notion that $3,600 could pay for a very posh vacation experience in most places around the world. It could also go into a 401K or an emergency fund for when she loses her job which is pretty standard as careers go Silicon Valley. I have many friends and can say that not one of them has escaped this fate during their careers. Either by acquisition, reduction in force, an out and out politically motivated firing, every single person I know has lost their job through no fault of their performance. This means that anyone who lives in Silicon Valley really needs that emergency fund. It isn’t even something to ponder, it’s a necessity.

So, you need an emergency fund but you also love coffee. You can have your caffeine and save too. I buy large bags of ground coffee from the Grocery Outlet about every two months. A large bag costs 9.99 which means I’m spending less than $60 a year on coffee. I use a large glass container, fill it a third of the way up, add cold water and stir well. Then I let it sit for three days in the fridge. When time is up, I use a coffee filter and a small colander to drain and filter and grounds out.

This is my price cold brew coffee. After I place my cold brew in a glass bottle, I recycle the coffee grounds in my flower bed and make more coffee immediately. I do this every three days, without fail.

The reality is, we each choose our poison. I love coffee as much as the next coffee drinker. I just don’t love the price of something I can make for mere pennies. Making coffee at home costs about $0.27 a cup which amounts to 3.375 percent of that $8 cup you pay for at the corner coffee store.

The choice is yours but I’d rather have the $3,500 plus for a posh vacation or to add to my emergency fund. 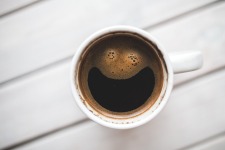