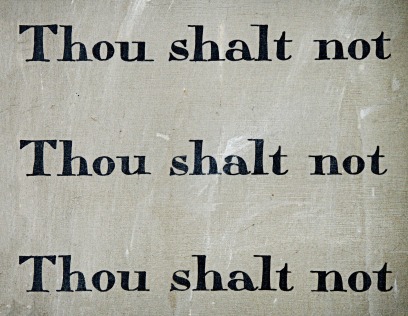 I have a lot of friends who complain to me that they would love to live more frugally only…they can’t. Gentle inquiries have made it pretty clear that they suffer from one or more of the seven deadly sins against frugality which clearly prevents them from living a frugal life. Those sins are:

Lust. Lust for things you don’t need. New cars, fancier residence, posh and brag worthy vacations, the list goes on and on. Just remember, attraction is fleeting. Anything you lust for today will quickly lose it’s allure once you acquire it and the debt that goes with it.

Gluttony. Americans in particular do not need nearly the sheer volume and amount of food they buy. Buy less, use less, waste less. Don’t let the overstuffed shelves of food at the grocery store seduce you. Buy only what you need.

Greed. Green comes in many forms. Greed means you want something you don’t likely need. If it is not a necessity so don’t really, REALLY need it, then don’t buy it, period. And if you have to get it on credit, you probably have far more pressing concerns than greed.

Sloth. If you have the ability to do something yourself like yard work, then do it. Don’t hire people to do what you can do yourself. Don’t be lazy. Paint, spackle, vacuum, clean, garden, whatever it takes to not pay someone else to do it. This mantra does not include things like fixing the dishwasher if you lack the skills to do so. Pay only for what you need to pay for and if it is pure grunt work, you can likely do it yourself.

Wrath. This is the felony conviction cousin of envy. It’s that inexplicable rage you feel when someone who surely does not deserve it, is blessed with seemingly unearned good fortune. The list ranges from your idiot cousin, to your untalented sibling, third trophy wives, winners (other than you) of mega millions lotteries, jerks who inherit money from relatives they treated like crap, mediocre workers who somehow ended up at places like Google with tons of stock options and now spend their days golfing and traveling while you toil away, and more. You need to let it all go. You need to be far more concerned with your business than what financial windfall may have befallen anyone else. I used to think a business associate of mine led a golden life, best jobs, most loving relationships, friends who would take a bullet for him, perfect financial investments…until the day I found out he was dying from pancreatic cancer. That’s the day I knew I would never trade my life, however imperfect, for anyone else’s. Gain perspective and focus on your world, your life and your blessings. That’s all that matters. You will then find yourself far less motivated to fill up that empty space inside with stuff because stuff won’t matter any longer.

Envy. Beware the green-eyed monster. Don’t let what your friends, colleagues or neighbors buy or parade forth, influence you. I worked at a frankly miserable job once where all everyone did was brag about their new car, expensive vacation, thousand dollar purse and shoes, etc.  And yet? They were the most miserable and debt-addled bunch of losers I’d never met. They were completely addicted to a superficial life of presenting a phony image yet none of them were remotely happy and if you scratched the surface, you quickly discovered that each and everyone of them was drowning in massive debt. These were the sort of people who would panic over a $125 expense check being a day late from accounting because they could not afford to pay their electric bill even though they had just gone on a $20K vacation.

Pride. Before pride commeth the fall says the Bible. Just because you can afford to buy it doesn’t mean you should. In fact, if you can only afford to buy it on credit, you shouldn’t. Period. And don’t be prideful when it comes to saving a buck. Ask for discounts, scour the Internet for deals, clip coupons, save money, bargain, negotiate.