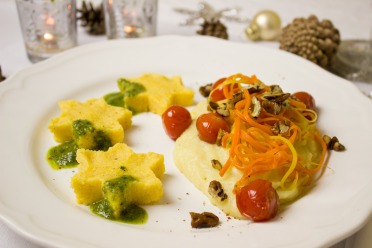 I was checking in on my dad today. Just a quick phone call to discuss his health (always a concern at 90 years young) and various light-hearted topics. My dad and I are in such a good place, we always keep in light and fun and thus he is always glad to hear from me. Drama and stress he doesn’t need so we talked about how I think being in lock down must be a lot like being under house arrest, and how the large wooden toy airplane my daughter gifted my partner is going to need my dad’s engineering expertise to mend, and of course, how I recently converted my partner to an ardent lover of polenta.

My dad grew up eating polenta, it was a staple in his home so we had a great talk about the history of polenta. It’s been around since Roman times, and like bread, it is what fed and sustained Roman armies. One might say that Rome built its empire on the strength of polenta.

Polenta is basically a dish of boiled cornmeal, a porridge if you will, that was historically also made from other grains. It originally came from Northern Italy, and remains a staple there along with Swiss, Slovenia and Balkan regions. Because it was originally associated with the lower classes, calling someone a ‘polenta head’ was considered quite the insult according to my dad. Known as pulmentum, from the Latin, corn was introduced to the Americas in the 16th century and it soon became a staple here as well. Prior to that time, it had been made from a wide variety of grains; everything from farro, millet and spelt to even chickpeas but corn meal is what defines polenta the best.

When my dad was growing up in Salinas, California, my Grandmother Daisy would often make a huge pot of polenta for dinner. They ate it with rabbit stew and there was always enough leftover for breakfast which she sliced cold and then fried, topping it with an egg. My dad loves polenta and I have a particularly sharp memory of going to visit her as a child and seeing her large, sturdy form at the stove, patiently stirring a giant pot of polenta for my dad. Those were the days when grandmothers wore pristine white aprons when they cooked. Those were more formal times, rabbit stew not withstanding.

Even today, polenta is just so cheap. So frugal that even frugal cooks think its a bargain at twice the price. A 16 ounce bag costs less than $5.00, putting the cost of four servings at about $0.60. That’s $0.15 a serving. Add in the cream and cheese and maybe it tops out at a mere $0.25 a serving. Not much less beats polenta for a side dish that costs next to nothing.

Polenta is also versatile. I use it to make my daughter’s favorite gluten free ricotta-polenta cake and I like it cubed and baked to serve as an appetizer with leftover pasta sauce for dipping. I also recently made it sliced and fried and topped with an egg for breakfast, an homage to my frugal grandmother and my dad’s lifelong fondness for the dish.

Some people use water or even milk as the liquid medium for making polenta but I prefer one of my go-to something from nothing staples, homemade chicken stock. I also like to use up whatever cheese I happen to have in the cheese bin, anything from asiago to cheddar though parmesan or Romano represent the most widely used choices. To add a bit of creaminess to the polenta, I’ve used everything from heavy or sour cream to mascarpone and even plain yogurt. And if I am making it just for me, I always season with a generous heaping spoonful of red pepper flakes because I like mine pretty spicy.

There is a case to be made for busy cooks using quick cooking polenta but honestly? I stick to the old fashioned form, the type that takes 30 minutes or longer. When I make my polenta, I like to think of my grandmother patiently stirring at her old fashioned stove, her wide-set form wrapped effortlessly in that crisp white apron with the ruffled edges sitting over a perfectly ironed housedress. I think the old fashioned kind has a better texture and taste. It also gets firmer when allowed to set up in the refrigerator, making it easier to slice or cube.

My dad went on to muse over the irony of how polenta has gone from being the food of peasants for literally centuries to becoming so trendy that it is now being served in the finest restaurants, costing a lot of money. This represents a goldmine for chefs of course. They make a pot full of polenta and charge an arm and a leg for what costs pennies to make. Clever.

You can follow those savvy chef’s frugal strategy by easily mastering the art of making a pot full of polenta and using it for a couple of meals. It takes on leftover vegetables graciously, transforming it from a humble porridge to a robust casserole. Cut into circles and bake or fry and you have a gluten free veggie burger. Sticks that you fry or bake? You have polenta fries which I can personally attest to costing more than $12 for a small plate at a local ‘trendy’ restaurant.

Not to be outdone, polenta can also be swapped out for the usual breakfast oatmeal by using milk to make it and adding a swirl of maple syrup and a dollop of butter. A sprinkle of cinnamon makes it extra fancy.

And while I just published this recipe in the recent $12 Fancy Dinner blog, it bears reposting here:

Boil the chicken stock and slowly whisk in the polenta. Non-quick cooking will take upwards of 30 minutes to thicken properly so keep the heat on medium. Once thickened up, add in the cream(s), salt and pepper to taste and cheese. Stir well, the polenta should not be too thick so add in heavy cream as needed. It should be the consistency of thick soup, not pudding. Serve hot and top with a pat of butter or another drizzle of olive oil.