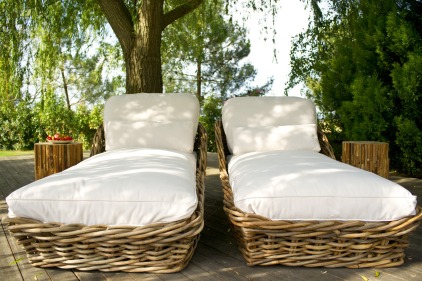 Friends and readers have been asking me what tools and tricks I have been using that are getting me through this pandemic and isolating at home. I always reply, without skipping a beat, “Slow cooker liners”.

Another little thing that has turned out to be huge is the ability to sit in my pocket-sized backyard and do my work. I bought a frugally priced but comfortable chaise lounge and sitting out in the back, under the shade of my pergola, has been a god send. Peace. My dogs often amble out and the deck with me, sit on a soft dog bed placed next to the chaise and I can work in silence for hours if necessary. And, when the air quality is decent, it is as close to fresh air and wholesomeness as I can get right now.

MLB. I am no huge sports fan but the reresection of professional baseball has meant that I no longer long to take a baseball to my partner in tenser moments. Thank you Phillies. The best days are those featuring double headers by the way but then again, all you baseball widows already all knew that.

Slow cooker. Not to be confused with the slow cooker liners, just using the slow cooker three or more times a week means that dinners, after prep, simply make themselves. And the frugal benefit is that I can often cook tougher cuts of protein and save money.

My garden. It’s starting to wane, my summer crops, but I have re-sown radishes and will be planting cooler weather crops here soon. I am relying more now than ever on fresh herbs from the garden and creating more frugal recipes. Below is my latest, corn and scallion pancakes, which cost next to nothing to make and rely on your herb garden and random corn that you might find in your fridge or freezer.

Read. I have taken up summer reading again. I actually dug out the entire LoTR series and, starting with the Hobbit, am working my way through Middle Earth again. The series, for those of you who have never read it, is wordy, plots are often moved ahead and worked through geographically, and thickly plotted on multiple levels. I am embracing all things Middle Earth. You might dig out the entire Harry Potter series if you aren’t into Tolkien. That’s what Muggles do apparently.

Slowing down. We aim for one outside errand or appointment a week, aside from grocery shopping.  Last week it was ferrying the dogs to and from the vets to get them much needed mani/pedis. This week it was smogging one of the cars. Next week, hair cuts. I used to try and pack all of these frantically in my off and down time but now? One a week is plenty, thanks. Not only does it cut down on the time and risk of spending outside of the house but somehow, I no longer feel the need to frantically rush to get everything done.

Organizing something, anything. For example, I routinely rearrange the freezers so my partner can more easily see what we have and pick his dinner protein. This helps us use up everything we have before even thinking of going out to buy more. In turn, this saves money in the long run. No overbuying or purchasing duplicates of what we already have.

Dollar store innovation. I keep finding new ways to save money via the dollar store. For example, over the years, I have had several bad consumer experiences with refrigerators that had ice makers. The ice makers all kept breaking until I swore off buying all refrigerators with ice makers. My current fridge is bare bones when it comes to bells and whistles, and thus has no ice maker which means it is likely to last a great deal longer. This was never an issue until this summer when my partner suddenly started asking for ice in all his drinks, prima donna that he is. Anyway, I decided a little extra effort was not going to kill either of us so I bought a 4-pack of plastic ice trays from the dollar store and they keep us fully stocked with ice cubes at all times. The solution literally cost me a dollar.

3/4 cup each: shifted all purpose flour and yellow corn meal

Mix together dry ingredients, making a well in the middle. Whisk in egg, milk and oil, stirring well. Add in corn kernels and scallions mixing again, add in more milk if necessary to make a pancake-like consistency. Batter will be lumpy. Melt butter in a very hot skillet and spoon in 1/4-cup measure of the batter for each pancake, frying until golden brown. Before flipping over, sprinkle with red pepper flakes if desired. Serve with butter and maple syrup. 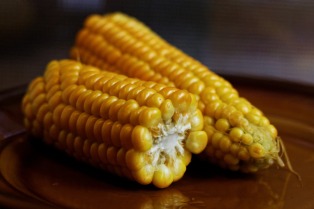